Trump hires 17 lawyers to protect him from Mueller investigation, while federal workers go unpaid during shutdown | Yeah right, a billionare was going to understand you

A beefed-up White House legal team is gearing up to prevent President Donald Trump’s confidential discussions with top advisers from being disclosed to House Democratic investigators and from being revealed in the special counsel’s long-awaited report, setting the stage for a potential clash

A beefed-up White House legal team is gearing up to prevent President Donald Trump‘s confidential discussions with top advisers from being disclosed to House Democratic investigators and from being revealed in the special counsel’s long-awaited report, setting the stage for a potential clash between the branches of government.

The strategy to strongly assert the president’s executive privilege on both fronts is being developed under newly arrived White House counsel Pat Cipollone, who has hired 17 lawyers in recent weeks to help in the effort.

He is coordinating with White House lawyer Emmet Flood, who is leading the response to special counsel Robert Mueller‘s report on his 20-month investigation into Russian interference in the 2016 campaign. Mr Flood is based in the White House counsel’s office but reports directly to Mr Trump. 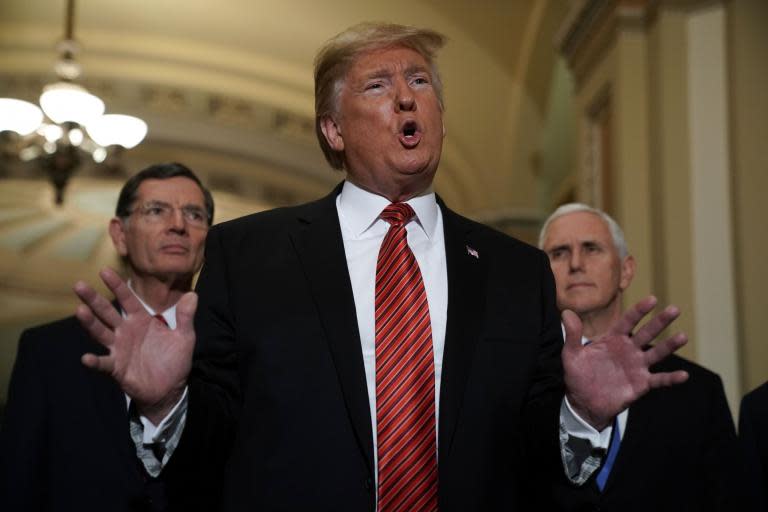 But any effort to fight investigators is likely to further inflame Mr Trump’s relationship with Democratic leaders and could lock the administration and Congress in protracted legal standoffs that may ultimately go to the Supreme Court.

Of particular concern to Democrats: whether the White House will seek to use executive privilege to keep private any portions of Mr Mueller’s report that addresses alleged obstruction of justice by the president.

There is a growing sense that the special counsel’s closely held investigation could come to culmination soon. Some Trump advisers think Mr Mueller could deliver the confidential report explaining his findings to senior Justice Departmentofficials next month. Under the rules authorising the special counsel, the attorney general can then decide whether to share the report or parts of it with Congress and the public.

Some House leaders have vowed to immediately seek to obtain a copy of Mr Mueller’s findings. But the White House would resist the release of details describing confidential and sensitive communications between the president and his senior aides, Trump advisers say.

It is unclear whether the special counsel’s report will refer to material that the White House views as privileged communications obtained from interviews with senior White House officials. Some Trump advisers anticipate Mr Mueller may simply write a concise memo laying out his conclusions about the president’s actions.

However, Rudy Giuliani, one of Mr Trump’s personal attorneys, said the president’s lawyers have made clear to Justice Department officials that they want to see Mr Mueller’s completed report before the department decides what to share with Congress. Their aim: to have a chance to argue whether they believe some parts should remain private under executive privilege, Mr Giuliani said.

“At that point, we can decide whether we have executive privilege exceptions to the report,” Mr Giuliani said in an interview.

The legal showdown could be one of the most significant debates over presidential executive privilege since President Richard Nixon sought to block the release of his White House tapes in the Watergate investigation.

Ronald Weich, an assistant attorney general under President Barack Obama, said the Mueller report will be of such “overwhelming interest” to Congress and to the public that it is highly likely the courts would rule in favour of Congress’ receiving it, as the Supreme Court did in ordering Mr Nixon to turn over his tapes in July 1974. Mr Nixon resigned the following month.

Mr Trump’s nominee for the top post, former Attorney General William Barr, has criticised aspects of Mr Mueller’s investigation. His Senate confirmation hearing is scheduled for next week. Mr Rosenstein is expected to leave the Justice Department if Mr Barr is confirmed, although the timing of his departure is unclear.

In preparation for the looming legal battles, Mr Cipollone has been beefing up the White House counsel’s office, which was down to fewer than 20 lawyers late last year, compared with 40 to 50 in past administrations. Four of the five deputies under previous White House counsel Donald McGahn had left the office, The Washington Post reported last year.

Since his arrival in December, Mr Cipollone has expanded the staff to about 35 lawyers, administration officials said, and he aims to bolster the ranks to 40 in the coming weeks. He also hired three deputies, all with extensive experience in the Justice Department and Republican administrations.

Mr Cipollone, a long-time litigator who worked briefly in the 1990s for then-Attorney General Barr, declined to comment. But Jay Sekulow, one of Mr Trump’s personal attorneys, said the new White House counsel has quickly assembled a stable of top-notch lawyers.

“It’s almost as if he’s building a law firm within a government entity,” Mr Sekulow said. “You have very senior lawyers coalescing into a great team.”

Under Mr Cippollone’s guidance, White House lawyers are preparing a strategy to fend off a blizzard of requests expected from congressional Democrats, who are planning to launch investigations into an array of topics such as Mr Trump’s finances and controversial administration policies.

Mr Cipollone’s goal, Trump aides said, is to try to find common ground with the congressional Democrats in responding to their subpoenas when he can, but to draw a clear line that would protect the confidentiality of the office of the presidency.

People who know Mr Cipollone describe him as a self-effacing listener who will work to build relationships on Capitol Hill.

“Pat will be enormously effective, because if you meet him, you are not going to immediately put up your walls,” said Melanie Sloan, a former federal prosecutor who attended the University of Chicago Law School with Mr Cipollone and now helps run American Oversight, a liberal watchdog group.

“Sure, you would expect him to take aggressive stands on executive privilege,” she said. “But if there is a court order, he won’t bring on a constitutional crisis by resisting it.”

At Sean Hannity properties in low-income areas, an aggressive approach to rent collection

New street cafe planned for Civic Center Plaza | With the Homeless issue we still have will this work well?