National debt at highest level since after WWII Thanks @realDonaldTrump

by West Arick
in politics, Politics
0 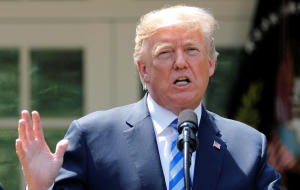 Despite President Trump’s declaration that he would eliminate the national debt over eight years, the debt-to-Gross Domestic Product ratio has reached its highest level since after World War II, according to a new report from the Congressional Budget Office (CBO). And if current law and spending levels remain unchanged, national debt will be nearly the size of the economy by 2028.

“At 78 percent of gross domestic product, federal debt held by the public is now at its highest level since shortly after World War II,” the CBO found. “If current laws generally remained unchanged, the Congressional Budget Office projects, growing budget deficits would boost that debt sharply over the next 30 years; it would approach 100 percent of GDP by the end of the next decade and 152 percent by 2048. That amount would be the highest in the nation’s history by far.”

The new report to Congress paints a grim fiscal outlook for the next three decades, blaming sharp increases in net interest costs, Social Security and Medicare spending, and generally flat revenues over the next few years. In a nutshell, according to the CBO, spending is growing rapidly year over year — and revenues and even the growth of the economy just aren’t keeping up with the pace.

In April 2017, Mr. Trump told the Washington Post he intended to eliminate the national debt “over a period of eight years.” But his administration’s push for tax cuts, combined with significant spending increases passed by Congress and signed into law by the president on top of already increasing non-discretionary spending, have driven the debt up, not pulled it down. The national debt topped $21 trillion for the first time in U.S. history earlier this year.

Republicans railed against the national debt during the Obama administration, when it nearly doubled from $10.6 trillion to $19.9 trillion. But Republicans — with few exceptions — have been more muted about the debt under Mr. Trump. Earlier this year, Kentucky GOP Sen. Rand Paul temporarily held up a spending bill on the Senate floor, blasting Republicans for approving of the spending levels they criticized under Obama.

Source: National debt at highest level since after WWII

It is time for IMPEACHMENT!